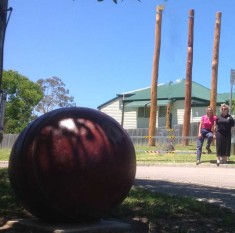 A public artwork created by Margrete Erling has been installed at Alan Davidson Oval, Wyoming to celebrate one of Gosford City’s greatest cricketing exports – Alan Davidson.Davidson, a hard-hitting lower order batsman and an outstanding left arm fast-medium bowler played 44 tests for Australia during the 1950s and 60s scoring 1,328 runs at 24.59 and taking 186 wickets at 20.53.Alan was named a Wisden Cricketer of the Year (1962), inducted into the Sport Australia Hall of Fame (1988) and is a member of the Australian Cricket Hall of Fame and the ICC Cricket Hall of Fame. Read below… 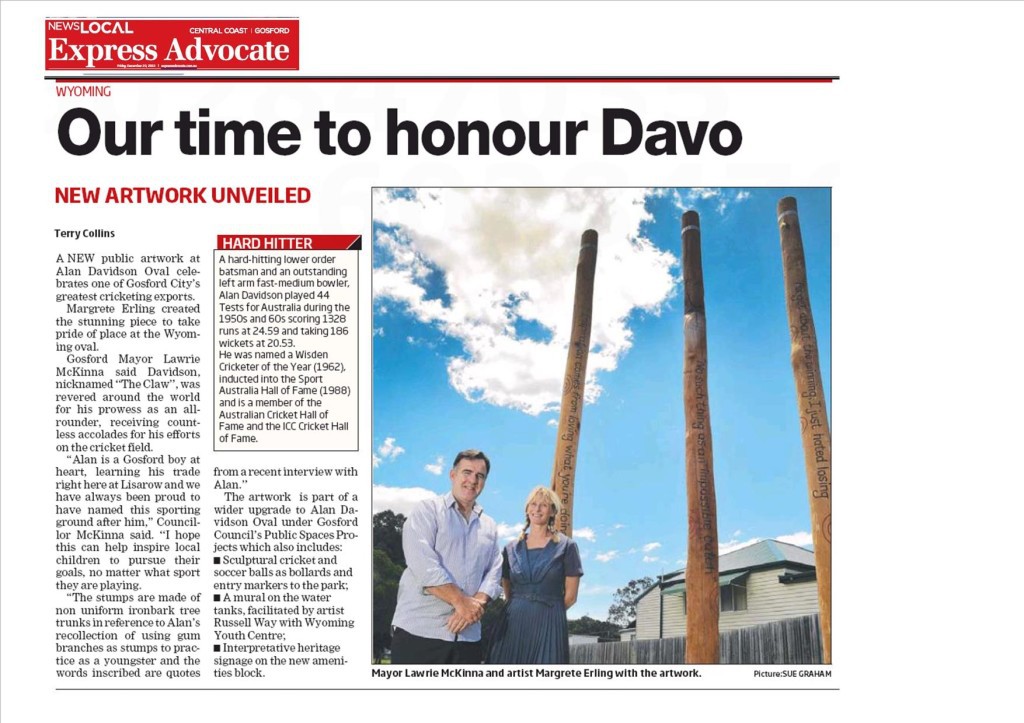 Mayor of Gosford City, Councillor Lawrie McKinna said that the sculpture was a tribute to one of our area’s great sportsmen. “Alan Davidson is revered around the world for his prowess as an all-rounder, receiving countless accolades for his efforts on the cricket field. “Alan is a Gosford boy at heart, learning his trade right here in Lisarow and we have always been proud to have named this sporting ground after him,” Clr McKinna said.

The artwork installation, is part of a wider upgrade to Alan Davidson Oval as a part of Council’s Public Spaces Projects which also includes:

The project (excluding the amenities block construction) was funded by the Attorney General’s Office.

Clr McKinna said that the addition of this artwork further adds to Alan’s legacy. “I hope this can help inspire local children to pursue their goals, no matter what sport they are playing.“The stumps are made of non uniform ironbark tree trunks in reference to Alan’s recollection of using gum branches as stumps to practice as a youngster and the words inscribed are quotes from a recent interview with Alan. “Local youth will be working on the mural for the water tanks over the coming months and I am looking forward to seeing the completion of this fantastic project.” said Clr McKinna.